No grander synthesis of the Silk Road and Imperial China exists than in the depiction of dances at Dunhuang. The 492 painted, carved, and sculpted caves at the edge of the Taklamakan Desert in far western China are a veritable Rosetta stone of ancient dances. What finer introduction to the fundamental dance ecology of China than an incomprehensibly vast expression of the profound significance of dance in Chinese culture, at a point where a hitherto Taoist and Confucian spirituality be- came integrated with Buddhism? 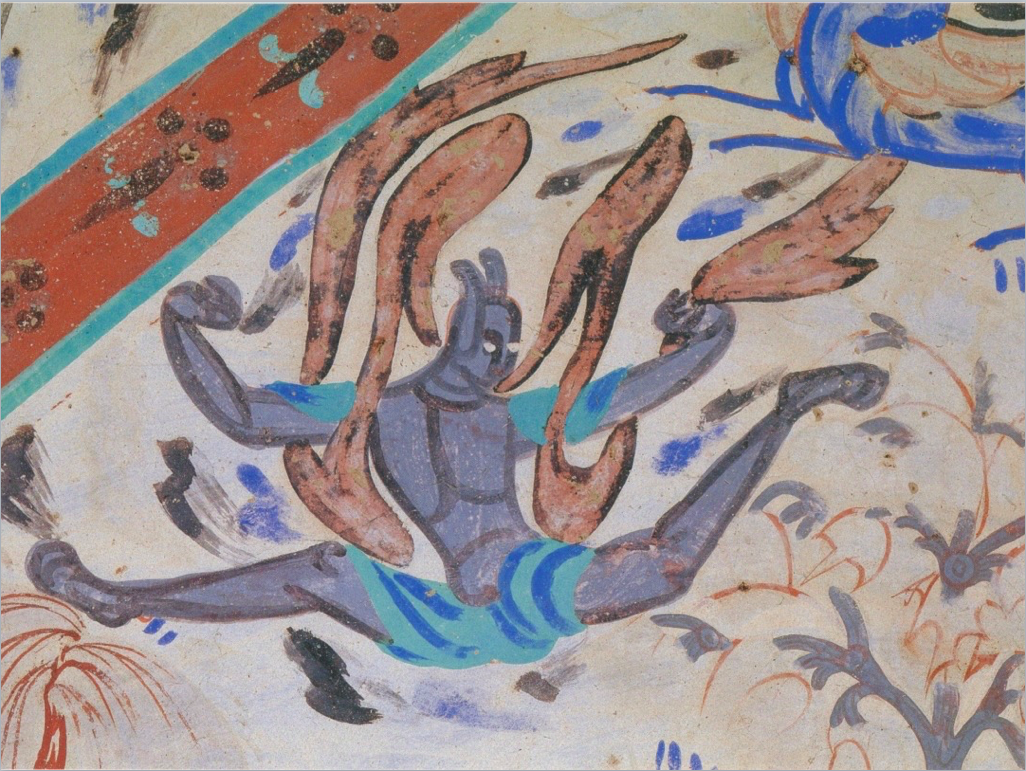 In the caves, the stabilizing central power as well as the magnificence of the artistic integration is characteristically Chinese.  The Great Wall is well known for having kept people out of China. Dunhuang is where they came in. Dancing provides an exalted record of how these devotees from the far corners of the known world conceived themselves.

In the broadest strokes, depictions of dance fall into earlier, mostly Wei Dynasty (also known as the later Han Dynasty, 220-265) paintings, influenced by Indian dances, yogic practices, and the mysticisms of Central Asia, where the body is often uncovered and the skin a bit darker, with each dancer and dancer- musician performing a different, dynamic, highly expressive movement. The dance and painting is, in fact, a kind of expressionism, an artistic and choreographic freedom unique to the period.

Later, especially Tang Dynasty (618-907), depictions of dance are almost exclusively court scenes of the Western Paradise, where the Buddha of the Future reigns over a display of praise and attainment. Earthly spirits dance near the ground, praising dancers inhabit the middle walls, ethnically identifiable but here subsumed into a more rarified assimilative ecstasy, fitting the formal, stylized, and detailed construct of a heavenly court that is seen in many of the later caves. Flying feitians dance in the heavens in gravity-defying acrobatics – joyful, wingless, Asian counterparts to Giotto’s anguished angels. The order provided by this classical formal construct and its many depictions becomes a new, grand dance itself, each mural featuring a new pair of dancers dancing in a somewhat different style, while at the same time relying on a uniformity of dancing shape to bolster an image of paradise.
High Tang Dynasty, heavenly dancer-drummerAn architecturally ascending mode of dance depiction parallels the assimilative ascending energy of Buddhism encountering and synthesizing older beliefs. Essentially, in these 492 caves, a great variety of ancient ethnic dances is brought into conformity by Buddhism.