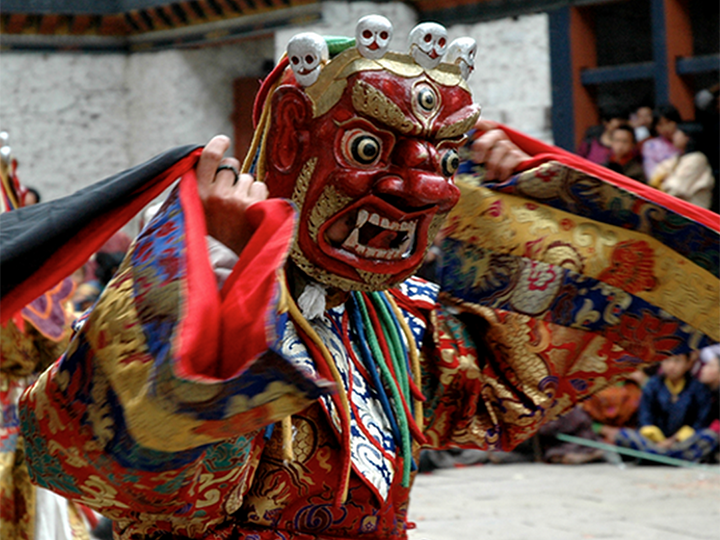 The years 2004, 2005 and 2006 were dedicated to expeditionary work throughout the Kingdom of Bhutan.

A total of 24 months were spent on the ground in Bhutan.

Over 500 hours of video documentation, 11,ooo photographs and 11 ethnographic journals. Copies of the Bhutan Dance Database were given to the National Archive of Bhutan and the New York Public Library.

Complementary fieldwork in art and dance culminated in an exhibition, "The Dragon's Gift: The Sacred Arts of Bhutan", which toured 6 museums in the US and Europe. The fieldwork and exhibition were sponsored by the Honolulu Academy of Arts.
‍
From Mount Parnassus to Mount Everest  (excerpts)
Traveling off-road in the ancient Himalayan kingdom of Bhutan, a land of high windswept mountain passes and isolated valleys, means leaving behind modern modes of transport—even wheels.  “Off road means traveling on yak, horse, or foot,” says Joseph Houseal.  Houseal, a gifted five-foot-seven athlete who once held the half-mile  ( half mile is not a sprint )  record in Michigan and was a professional ballet dancer, says even he gets weary at times.  “Off- road it can take five days with our video cameras to get to a sacred  ritual or dance festival,” says Houseal, who travels in Bhutan for months at a time as part of a five-year project to document this isolated  kingdom’s  ancient dance forms.Landlocked in the eastern Himalayas, adjacent to Tibet, between China and India, and with entry by foreigners strictly controlled, Bhutan is an isolated sanctuary of nature and ancient culture where dance is integrated into every aspect of life. The Bhutanese practice monastic dances, lay religious dances, masked dances, and other sacred dance rituals. Dance is a form of meditation, communication, and information.

“Dance in Bhutan is not the same thing as it is here in the States –we have one word for dance.  In Bhutan, they have over 20 words for dance; it is deeply significant,” says Houseal.
Dance is Bhutan is also deeply endangered as centuries-old forms of feudalism meet the 21st century.  “Today the Bhutanese are on the brink of creating a generation that will have young people who cannot dance,” says Houseal.

When Houseal is in Bhutan—thousands of miles from the states—he is closer than ever to the rural roots of his youth in St. Joseph, Michigan, where his father is  a blueberry farmer. The Bhutanese, a majority of whom practice Tantric Buddhism, recognize in Houseal a fellow farmer and sense that he is “on a divine mission,” says Houseal. “It is a completion, coming full circle. Everything in my life has come together into this work of dancers preserving dance.  I am alive because I have this purpose.”
During the seven months a year that Houseal spends traveling in Bhutan, his quest to locate sacred dance rituals has both the passionate zeal and rugged terrain of a spiritual pilgrimage.  In Bhutan, Houseal travels on and off-road with his British associate, Jessie Horton, and a Bhutanese film director, Karma Tshering, who speaks 14 of the 22 Bhutanese languages.  Houseal describes how last spring for instance they reached six festivals and had three months to shoot 125 hours of film—but to get to each festival it took up to five days each way trekking off-road.  “Once we got there, the festival was three to five days long. In Bhutan these dances go on all day –it can take a lifetime for a deep spiritual transformation, linked closely to Tantric Buddhism, to take place.”
Houseal’s journeys often lead him to encounters with the mysterious and the mystical.  In one encounter he saw exactly what is endangered in Bhutan:  “We met a monk named Lopon Sangay. He has been a monk since he was eight years old.  When we met him, he had been awake for 16 days, dancing five and a half hours a day in an elaborate three-week ritual.  He couldn’t understand why we thought that was amazing. In his mind he was simply acting out the Dharma, his practice as a monk; it’s a way of life in Bhutan, dancing as a practice.  It is these internal teachings that are endangered,” says Houseal.  “Movement can be preserved and taped, but the internal teachings – training the body and the mind, the organs, using visualization, projectory movement, and energy awareness--cannot.  When Lopon dances his body, mind, and spirit are transformed.”  The audience or observer is also transformed as Bhutanese dances are spiritually potent. “It is a fusion of mind, body, and spirit that leaves a karmic, compassionate imprint on the audience,” says Houseal.
‍
“In Bhutan, you don’t applaud after a dance is performed; you absorb the energy—so you can’t help but be transformed and take something away from it with you.”

Click for the summary of the Bhutan Dance Project