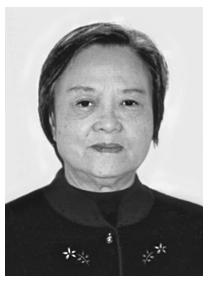 No grander synthesis of the Silk Road and Imperial China exists than in the depiction of dances at Dunhuang. The 492 painted, carved, and sculpted caves at the edge of the Taklaman Desert in far western China are a veritable Rosetta stone of ancient dances. What finer introduction to the fundamental dance ecol- ogy of China than an incomprehensibly vast expression of the profound significance of dance in Chinese culture, at a point where a hitherto Taoist and Confucian spirituality became integrated with Buddhism?

In the caves, the stabilizing central power as well as the magnificence of the artistic integration is characteristically Chinese.  The Great Wall is well-known for having kept people out of China. Dunhuang is where they came in. Dancing provides an exalted record of how these devotees from the far corners of the known world conceived themselves.

In the broadest strokes, depictions of dance fall into earlier, mostly Wei Dynasty (also known as the later Han Dynasty, 220-265) paintings, influenced by Indian dances, yogic practices, and the mysticisms of Central Asia, where the body is often uncovered and the skin a bit darker, with each dancer and dancer- musician performing a different, dynamic, highly expressive movement. The dance and painting is, in fact, a kind of expressionism, an artistic and choreographic freedom unique to the period. 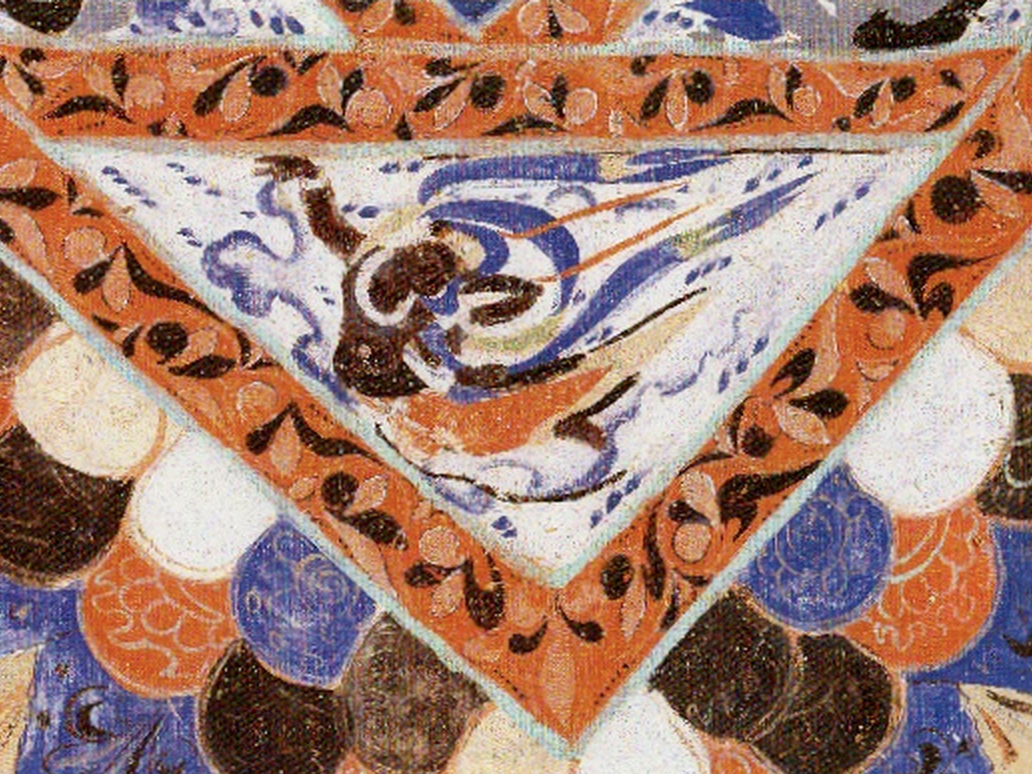 Later, especially Tang Dynasty (618-907), depictions of dance are almost exclusively court scenes of the Western Paradise, where the Buddha of the Future reigns over a display of praise and attainment. Earthly spirits dance near the ground, praising dancers inhabit the middle walls, ethnically identifiable but here subsumed into a more rarified assimilative ecstasy, fitting the formal, stylized, and detailed construct of a heavenly court that is seen in many of the later caves. Flying feitians dance in the heavens in gravity-defying acrobatics – joyful, wingless, Asian counterparts to Giotto’s anguished angels.
Feitian flying

The order provided by this classical formal construct and its many depictions becomes a new, grand dance itself, each mural featuring a new pair of dancers dancing in a somewhat different style, while at the same time relying on a uniformity of dancing shape to bolster an image of paradise. An architecturally ascending mode of dance depiction parallels the assimilative ascending energy of Buddhism encountering and synthesizing older beliefs. Essentially, in these 492 caves, a great variety of ancient ethnic dances is brought into conformity by Buddhism in art.

What was missing in our group touring in Dunhuang was someone knowledgeable about the living dance traditions that might be descended from the dances depicted in the caves. I know some of the Himalayan and Central Asian dance traditions from which depictions were produced but am not con- versant with the Chinese dances that provide the fundamental choreographic framing on the walls.

I had studied the dance imagery in Dunhuang for several months prior to my trip, relying heavily on the writing of Mme Wang Ke-fen, who established dance history as a subject in China, and is the author of at least four books on the dances of Dunhuang as well as the most respected and translated histories of Chinese dance. One of her books is in English, another bilingual with the English translation by Jiang Dong, and the others are in Chinese. Fortunately, I was able to find a willing translator to help me with specific images and caves that caught my eye.

Noting that she was listed as a Fellow of the Dunhuang Academy, but not knowing if she was still alive, I asked Wang Xudong, the Academy’s Associate Director, for her phone number and had it in less than three hours. Mme Wang was eighty-two years old and living in Beijing when I met her in 2009. A friend arranged for a skillful translator, and once returned to Beijing, I made my way to pay homage to this great scholar, who is Associate Research Fellow of the Institute of Dance of the Chinese Academy of Art.

For our meeting, Mme Wang had a library of dance imagery in fine art laid out. Since both of us are aging dancers, we didn’t hesitate to demonstrate an arm or body movement. With her encyclopedic recall of Chinese dance, she is, as the Indonesians say, a “library on fire.” She made use of a successful technique with me: she would rest her hand on my fore-arm when explaining something (it was uncanny how she knew what I was going to ask) and only when she lifted her hand was I permitted to speak.

Wang Ke-fen: Dance is an art of morphology; it defies the written word. Therefore, artistic depictions become valuable. I began studying art history and from that I was determined to establish a field of dance history, so began to do dance research in 1956. It is only in China where words and images have never stopped recording this history of dancing, which existed in every aspect of life since primitive times, and functioned in the earliest productions of humans, being directly involved in the origin of art. One of the challenges of translating my books is that they are full of ancient quotations, difficult even for Chinese to understand.

The dance paintings at Dunhuang reveal a fixed idea about aspects of aesthetic characteristics, yet they differ in costume, style, and gesture. Every cave requires a Buddha, usually placed in a scene with adoring crowds, and a stage that is based on an Emperor’s stage. I have seen the exact stage in Japan. It could have been a bugaku stage.

BR: I have been with Robert Y. C. Ho to see the World Monument Fund’s restoration of the Qianlong Emperor’s private stage for an audience of One inside the Forbidden City, and that two-part stage was very nearly identical to the depictions in the caves; and indeed to any number of Japanese temple stages, the design of which are Chinese in origin. In fact, the same seventh-century Japanese ruler, Shotoku Taishi, was responsible for import- ing both bugaku court dances and architectural styles from China.
‍
Wang: There is a recurring image of the Western Paradise where an elevated Buddha is “followed” lower on the wall by holy courtiers, entertainers, musicians, and dancers. Above it all are flying feitians, doubtless in imitation of old dance forms. These dancing images are not only in Dunhuang, they are all over China in many cave sites. I have traveled and studied the Indian cave sites at Ellora and Ajanta – no feitians! Their movement and invention comes from Central China. 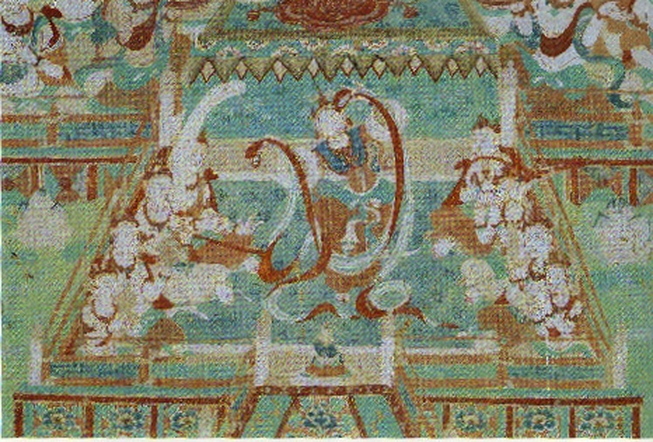 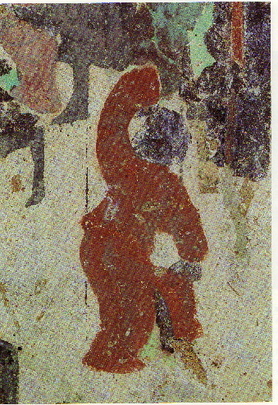 BR: So it might be related to Taoism and the traditions of the daoyin tu energetic gymnastics. It was certainly in the courts. There were Chinese Buddhist aristocrats from the third century who were well versed in Taoist physical arts, and Taoist visualization methods attained a refined articulation with the Shang-qing school in the fourth century, emphasizing a visualized microcosmos, an inhabited mystical heaven with visualized characters moving about within it. Some of the feitian’s movements are strikingly similar to daoyin tu traditions in gymnastics.

Wang: An interesting idea. No one really knows the precise origin of the feitian movements. For a long time now, the idea in China has been that “folk dances” should represent the ordinary people but be done by only the best and so adapted into a professional performance culture for the stage, with dancers trained at dance academies. This is what the Chinese people know as folk dance.

But I so like how it is in Taiwan, for example, where dance has been given back to the people, and anyone can teach a tradition freely whether a professional or not. Attitudes toward the ethnic minorities [non-Han] in China are changing. Nowadays the emphasis is on giving the dance back to the people via a grassroots transmission of old dances. That would be a beautiful expression of China.

BR: Do these dances still exist? And do they connect in any way to the dances depicted in Dunhuang?

Wang: Without a doubt. Many are in Yunnan Prefecture. China has fifty-six ethnic minorities. They are an expression of China’s greatness. Everything you see in the Dunhuang caves has been shown to be based on real-life examples. All the instruments have been carefully reconstructed and shown to be real. I believe the dances are real too.

BR: But there seem to be at least two, maybe three basic categories: the early Wei Dynasty depictions, the Tang Dynasty heavenly court scenes, and scenes that look like village people dancing. Was there some kind of actual aristocratic assimilated dance? That, after all, is how ballet came about in the West.
Wang: It’s complicated. The Chinese have been performing collections of dances since the ancient shao dance written about by Confucius, so assimilation generally is an issue, one that is based on people’s taste and desire to see new dances. The heavenly dances at Dunhuang are both Buddhist and aristocratic assimilations. Let me explain. Did you see one heavenly scene where a nomadic dancer spins on a small circular carpet off to the side and below? And another, “the brown family,” where a family is dancing?
‍
BR: Yes.

Wang: Is there an audience?

Wang: This was a slave society, and the dancers were slaves. They did the dances the owners wanted, whatever their origin. In the paintings you will see an audience, a courtly one and a heavenly one. The audience faces downward, just as in a court. Each patron likely used his own dancers as models, part of the overall flavor of an individual cave. It was not until the ninth century that the stage was elevated and the audience looked up.

BR: So why do the heavenly court dancers look so much more standardized than the Wei Dynasty images, which also coincide with slave society?

Wang: The Wei Dynasty images are not slaves; they are real Silk Road dancers. They introduced the architectural placement of dancers with feitians at the top in heaven, deified dancers who are giving praise on earth in the middle, and people at the bottom in low-earth. I say “deified” in the sense that the entire scene is deified; gestures themselves become deified. Those Wei figures are truly expressing from the inside out.

These early paintings with Central Chinese feitians and expressive nomadic dancers were the first shock-meeting of Chinese and Silk Road dance influences. The nomads, includ- ing the Mongolians, did not have a stable court life or culture, so it is fair to say that they gave inner expression and a kind of realism, where as the Chinese gave refinement.